The day began like most any other weekend day. Yet so much came to unfold as the day came to a close.   There was magic in the air.  Jamie and I decided to spontaneously go and listen to a friend who was playing guitar at an unfamiliar restaurant in the smallest of towns. We had invited another friend to join us, but she was going to be delayed, if she was going to be able to make it at all. From the moment we walked in, we absorbed the beauty of this amazing place. We were graciously greeted by the owner who proceeded to seat us at a small table for two. I had told the owner that we were brought to his elegant restaurant to see a friend play guitar for them. The owner shared that he was also aware that today was the musician’s birthday. Although it was dark outside, from our table you could see a waterwheel through the window of the restaurant.  Jamie and I ordered our dinner and continued to take in the beauty of our surroundings, which one would not have believed existed from outside the front door. After a few minutes, the owner came over to our table and asked if we wanted to move so as to sit with our friends, the musician and his wife. We agreed and were seated in an even more beautiful area of the restaurant. And the magic continued to unfold.


The musician and his wife arrived, surprised to see us and greeting us ever so kindly as if we were old friends who had not seen each other in ten years.  Together we talked, we shared and we experienced.  As time passed we had various people visit our table. Some were old friends of the musical couple; two others were previous students of the musician. The owner and his wife would come and share various stories. The wife of the owner had known the wife of the musician for a long time. Each visitor arrived with a story and a connection to one or more of the four of us. At one time there were four women, including Jamie and I, who shared a connection through attending SUNY Cortland.  Another person eventually shared that she had attended Marywood College for her social work degree where I had also attended.   There were connections through colleges, churches, towns and organizations. The synchronicity of it all left us in awe of the entire experience. Not only had we all helped each other in some way of advice or sharing, each person who came to that table was touched in a profound way by one another’s presence. It was truly amazing! I went to dinner with Jamie, and left with a connection to Ithaca College for Kelci, a guitar teacher for Marissa, information regarding Hope Lake Lodge, new friends who own an antique shop, and an understanding of true hospitality by people who were strangers and are now friends.
I believe tonight Jamie and I had our own version of It’s a Wonderful Life!
Thank you Clarence! 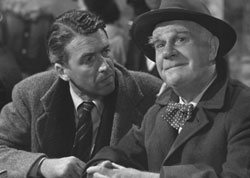